Why Do You White Men Have So Much Cargo?

By: Prince Sefa-Boakye, Founder of What Are Black People Like. 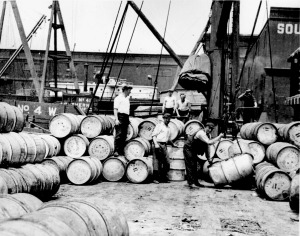 “Why you White Men have so much cargo, and we New Guineans have so little?”

This question explains everything. It explains why I created this start-up company; why it is the premise to “What are Black People Like,” and why Race does matter. At first, I didn’t believe Race did Matter. But when I traveled and finally opened my eyes to the realities of this world, I changed my thought process.

“Why you White Men have so much cargo, and we New Guineans have so little?” Yali from New Guinea

In a world that gives no credence to Race at all, this man of dark skin, located on the shores of New Guinea, (with little or no Western Education) gave Race all the credence in the world. He inevitably forced a Western Educated man of fair skin to travel the ends of the Earth in search of this very question.

In late 2007 at San Diego State University, I was shown a movie, called “Guns, Germs, and Steel,” about a sociologist, named Jared Diamond, who went on a quest to answer, Yali’s blunt question on the shores of New Guinea. And in his quest, Diamond discovered that the reason why “White Men Have So Much Cargo” is because of Guns, Germs, and Steel (which is now a book written by him). But what did that do for Yali in the end, I wonder? Did that change his status quo that White Men have everything and New Guineans (men and women of dark skin) having nothing? Or did he utilize that information to work his way up the “success ladder?” Unfortunately, we do not know.

Looking back at it now, I realized that this didn’t do much for Yali, because “Did diamond’s discovery lead ‘White Men’ to see the errors of their ways, and help dark-skinned people like Yali with their cargo?” I think not. Diamond’s answer was rhetorical. If Diamond were to refresh his education about the gentrification of Native Americans in North America, he may have saved himself a trip around the around, to educate Yali on those very shores. However, after several years of attaining a college education and soon now a law degree, I’m still left with Yali’s question. And now its coupled with a Western Philosophy, that I have been subjugated to believe as true:

“Race doesn’t matter. What matters is not the color of your skin but your determination and skills coupled with your will to succeed.” –Western Philosophy of Success

This may work for the few but it doesn’t work for the whole, because we still have men and women of dark skin (like Yali), around the world, who “lean in” all the way, with or without a Western Education, but can never match the cargo of their immediate cousins of fair skin. And dark-skinned people who do live in America, may not own cargo for themselves–they purchase cargo that is not theirs to begin with. So we are left with this mathematical formula of a paradox.

= Pockets of Despair and Turmoil in the African Diaspora.

How can we say Race Doesn’t Matter, when you have people like Yali (both inside and outside of America) who can’t even match their own cargo with their immediate cousins of fair skin and question his or her own skin color?

(For those who still want to challenge this, then I challenge you to stay a month in a Middle Eastern country (Syria, Iran, Iraq etc.) and ask if your skin color didn’t matter to you?)

Whether you may like it or not, (or believe it or not) the African Diaspora (New Guinea, Africa, Cuba, Haiti) share the same philosophy as Yali: “White Men= So Much Cargo; Black Men=Little or No Cargo.” But they also share the same “Western philosophy of Success”: “Move to America and earn cargo without being looked at my skin color.” But when you mix these together, you end up with Despair and Turmoil in a lot of communities in the African Diaspora. Furthermore, a lot of dark-skinned men and women, like Yali, can’t move to America for success because they have little or no cargo to trade with. So what do we do? What should we do for people like Yali? How can we fix the problem both here and around the world? The answer is simple: Delete Yali’s status quo and insert a new one; a new reality.

“In order to see change in the world, you have to Be the Change.”

My mission is simple: educate the world on the African Diaspora and promote black entrepreneurship abroad. But NOW it is to create a new “positive” status quo for black people and Africans abroad—one that says, “Black people are rich!” through entrepreneurship, intelligence, and education. The status quo that the world has “subjugated” blacks to believe in is not a pretty one: crime, poverty, drugs, uneducated, vulgarity, hypersexuality, pants sagging below the waist, flies on our face, you name it! In order for blacks to have cargo, we have to change the status quo that we are poor!

IF YOU ARE READY TO CHANGE THE NARRATIVE AND BE AN AFRICAN ENTREPRENEUR, GO TO

I strongly believe that education is the key to success and happiness for all, and the reason why many do not invest their dollars (currencies) to dark-skinned people is because they are not educated. Many are educated in the resources that many African countries provide (oil, gold, precious metals for phones) but are not educated towards the people that live there because they subjugate themselves to the “the status quo” of dark-skinned people, like Yali: poor, uneducated, and “you have no cargo to trade with us.” Instead of reaping (or taking away) the resources from these countries, which have people of dark skin, we should invest in them. If financial markets can invest in people in Hong Kong (for their human resource in technology, expertise, etc.), then I’m sure they can do the same for the people of New Guinea. It’s time for countries, like New Guinea, to educate the world, about their African Diaspora, and realize their self-determination and prosperity.

What if people today had the enthusiasm to understand Yali and invest their currencies to LEARN the language and culture of his people, like we do with Hong Kong, Tokyo, Spain, New York, Paris, and even Dubai? Do you think Yali would be better off? Would Yali continue to carry his negative status quo? Or would Yali have an incentive to invest in himself and his culture (monetize it)? Furthermore, STAY HOME and create the largest tower in the world for world citizens to marvel at?! So what’s lacking in this possibility? Yes, you guessed it, Education!

IF YOU WISH TO ADVERTISE, SPONSOR, OR INTERN FOR US, SO WE CAN HELP BLACK PEOPLE LIKE YALI..

Maybe it’s time for dark-skinned people in Africa, New Guinea, and abroad to stop chasing a Western Education and instead build an education around their culture and resources, so that the world can have a better understanding, and a financial incentive, to invest their cargo to trade with. With the power of social media, I believe black entrepreneurs everywhere can create a new reality and bring cargo back to their respective countries or communities. Let me close with this:

The greatest fear is not war or hate, but not knowing.

Maybe I am the new Jared Diamond because now I have the enthusiasm to learn my own question: “What are Black People Like?” One other thing: